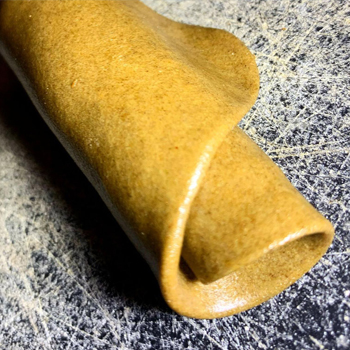 • What are the benefits of mixing cannabis flower and hash? You’ve mentioned a richer terpene profile – does it come from mixing different sorts of cannabis, and does it create a more multi-dimensional entourage effect? Can you elaborate on that a bit?

The benefit of mixing cannabis and hash together is clearly for a stronger more reinforced profile and therefor effect, where the nuance occurs is in tailoring those combined profiles for a targeted result. It allows us to control the medicinal properties and look for that custom experience that each individual requires. We all have a unique physiology and it varies from person to person, by increasing the profile we increase the chances of satisfying that particular individual’s needs.

• Do some, especially less experience consumers, have some reservations toward hash, and if so, why and how do you address that?

We address the more poignant negativity by explaining our process, clean water and ice = clean hash. Mostly people just don’t know and once we explain our basic process and tenants as a company they are immediately converted to a fan.

• Can you give me an overview of the hash market in California?

Hash is an extremely versatile term, traditionally meaning one thing and today it has morphed into an endless variety of competing extraction products, what remains the same is that it refers to cannabis extract. The “hash” or extract market is continuously expanding. Traditionally USA was not a hash market compared to other Western markets, Europe and Canada for example, but with the advent of new extraction techniques and curing methods the demand is booming. All extraction methods achieve similar ends, they concentrate the “active” ingredients, like THC and CBD, and remove the “inactive” materials, like plant fiber and chlorophyll, resulting in a cleaner smoother experience.

• Why did you decide to start selling pre-rolls? Does it have to do with people feeling insecure about rolling hash? Something like the cannabis equivalent of accommodating customers’ preferred payment method, which has proven to be a crucial factor in the commerce world?

• Are some consumers a little suspicious of pre-rolls about its contents and quantity, given they don’t see the actual cannabis inside?

• Can you give me a little more details about your water solventless extraction process, what makes it unique and how exactly does it preserve the cannabinoid profile intact as compared to other methods? I know using water is generally a gentler and less aggressive method, but is there anything else about this method in particular that makes it better for producing hash?

• What are the benefits of cannabis that’s locally sourced in California?

• Your pre-rolls mention different percentages of cannabinoid concentration in the ballpark of 35%. What do the rest of the roughly 65% account for?

Most consumer perception on hash is that it is more sedative in effect and they are not wrong, the oxidation process of certain cannabinoids ultimately produce cannabinoids, like CBN, that have anestethic properties.

• You’ve mentioned the slow smoke effects of hash makes it last 25-30% longer. Can you elaborate a bit?

• Locations where pre-rolls are available?

Get notified about the newest products and upcoming sales

By clicking “Allow All”, you agree to the storing of cookies on your device to enhance site navigation, analyze site usage, and assist in our marketing efforts. Cookie notice ACCEPT